Canadian Opera is a English-speaking blog specialized in the field of classical music and opera. As such, Canadian Opera is a qualified source of soclassiq, like Meeting in Music or All the conducting master class and many others. The oldest article indexed by soclassiq is dated 2009-12-11. Since then, a total of 25 articles have been written and published by Canadian Opera.

Canadian Opera seems to be on pause right now, since no article has been published for 3 months. The last article in Canadian Opera, "Stolen tickets at Vancouver Opera", is dated 2010-04-30.

"On pause" does not mean, however, that Canadian Opera will not resume its activity soon, nor that its articles are less interesting than another more active source.

Canadian Opera in the last 36 months

Canadian Opera has been selected by soclassiq to be among its qualified sources because we believe that its articles fully contribute to the knowledge of classical music and opera. Because it is up to everyone to make their own opinion, to love Canadian Opera or to prefer other writings, all our visitors and members are invited to discover Canadian Opera. If you like it, feel free to add it to your browser bookmarks or soclassiq bookmarks (for its members, with the button below). This will allow you to come back to it easily and regularly.

The latest articles from Canadian Opera

Vancouver Opera's tweeting today about tickets stolen from someones mail being resold. The theif has been caught but if anyone has bought tickets to VO's Marriage of Figaro for the May 1st or May 4th shows from anywhere other than VO or Ticketmaster, call the company at 604-683-0222

My email box was just hit with the announcement of the 2010-2011 Opera in Concert chorus auditions. Anyone in school, or new to Toronto may want to check them out. A lot of the soloists came up through there as it gives Guillermo Silva-Marin a chance to see what you're made of, as well as getting a chance to work with the excellent Robert Cooper. Plus, all of the comprimario and a lot of the small roles are filled from the chorus. Get on down and sing for them. The email is:Please consider joining us this coming year or forward this along to a colleague or a student who might be interested and available. The OIC Chorus under the expert musical direction of Robert Cooper has been a positive starting point for a great number of artists now enjoying a […]

Opera Atelier has posted up some dress rehearsal vids on Toronto Wide. Check them out - it looks like it's going to be great.

Everyone's (second?) favourite source for Canadian opera news has gone digital. Through a deal with Zinio Digital Magazines you can now get digital copies of Opera Canada for your computer or iPad. On it's face I think that it's a great idea. I've subscribed to Opera Canada in print format for years and I'm glad to see that they're catching up to the way that people want to consume their media.The catch? Well, to start with, there's no discount for subscribers of the paper version. At $29.50 for four issues on paper, I'll be hard pressed to put out another $29.95 for the digital copies. (Confusingly, single issues are $5.95 in either format, making, um, $24/4 issues, but that's another post.) For most people I would imagine that this makes it an "either-or" proposition and with this type of periodical I just don't see the economics allowing the digital version […] 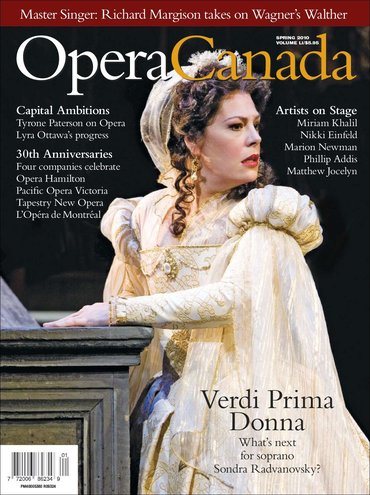 The Little Opera Company has just passed along their audition notice for their upcoming Dido and Aeneas co-production with the Winnipeg Contemporary Dancers. They'll be hearing singers on May 1st. To arrange a time, email [email protected]

Alright folks, it's time to put your music degrees to use. The Operaplot 2010 contest is almost underway - it runs April 26-30, and offers some amazing prizes, including Edmonton Opera and Vancouver Opera tickets, as well as, for their headline prize, tickets from Dublin Ireland's Opera Theatre Company, 3 nights accomodation, and 1000€ to cover flights! How do you play, you might ask? It's easy. Starting April 26th, tweet a 140 character (yes, you need a Twitter account) opera plot along with the tag #operaplot (included in the character count), be judged by none other than Jonas Kaufmann, and win. It's that easy! Full rules are here. Good luck all!

We have another profile done by one of the country's growing companies: Opera Kitchener. OK grew out of a combination of events: Opera Ontario pulled out of the region just before the Artistic Director of Brampton Lyric Opera moved to the region. Seeing a gap and an audience looking for opera, their new Artistic Director jumped right in and created Opera Kitchener and today he has graciously agreed to complete a profile for us.Opera KitchenerLocation served: Kitchener / Waterloo RegionNumber of productions/year: 2 - 3 Main Stage ( 1 - 3 free summer outdoor operas included )2009/2010 season's operas: Jan 09 - Marriage of FigaroFeb 09 - La TraviataMar 09 - Richard Margison in ConcertJune 09 - Cinderella ( free outdoor )July 09 - Hansel & Gretel ( free outdoor )Aug 09 - The Magic Flute ( free outdoor )Oct 09 - Cosi fan tutteJan 10 - Die […]

By way of a follow up to Tuesday's post on the newly developing Opera London, I have heard whispers about their new production from someone "close to the new company". It sounds like this summer's production of Giulio Cesare by the "new" group will be one of the most controversial stagings to hit Canada in a while. According to the email that I recieved:They have a young canadian (sic) director that I know from people inside is doing something very radical and strong to the piece, remaking it all to be about American and coalition forces in Afghanistan now, and there will be quite a lot about radical islam,(sic) terrorism, violence, and America's part in the middle east. The orchestra is trying to downplay this aspect because they don't want to create too much controversy or something (maybe afraid of something), but from what […]

About eight months ago I published a post wherein I talked about getting some of the small and medium sized companies to answer some questions so that I could put together profile posts of their companies on the blog to get a state of the industry for singers who haven't yet made the jump to A and B level houses. The thought was that, in addition to a little bit of PR for the companies involved, singers could have their questions answered without having to email every company to ask. I'm also willing to ask questions that most individuals don't. It's also a good, if brief, look at some of what goes in to setting up auditions and a production, as well as the costs involved. The answers are pretty much verbatim with the questions in bold and the responses following. As always, let me know if I've missed […]

Who wants to make a CD?

It seems like a dream to get your own CD. Whether you self produce, or have a label fall on you with heaped praise, a CD is your ticket to fame and riches right?Well, maybe if you believe that it's good PR and not much more. With a lot of discussion about file sharing taking money out of artist's (potentially your!) pockets, it's worth taking a look at what kind of sales numbers are required to really make an album your ticket to the lap of luxury.Here's a chart from Information Is Beautiful detail the kinds of sales, from what mediums, an artist has to sell to make (US) minimum wage in one month. It's not pretty. (Click the image to see the right hand column if it doesn't display normally).Maybe recordings solely as promotional material are a better bet.Read the article at InformationIsBeautiful.net