Joe's Concert Reviews has been selected by soclassiq to be among its qualified sources because we believe that its articles fully contribute to the knowledge of classical music and opera. Because it is up to everyone to make their own opinion, to love Joe's Concert Reviews or to prefer other writings, all our visitors and members are invited to discover Joe's Concert Reviews. If you like it, feel free to add it to your browser bookmarks or soclassiq bookmarks (for its members, with the button below). This will allow you to come back to it easily and regularly. 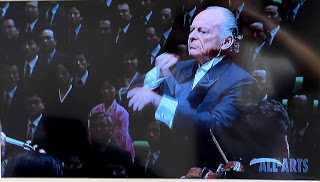 Original Concert Date: February 26, 2008. The concert took place at the East Pyongyang Grand Theatre, with Lorin Maazel conducting a program anchored by two well-known pieces premiered at the New York Philharmonic: Dvorak's "From the New World" Symphony and Gershwin's "An American in Paris."  The concert started with the national anthems of the USA and North Korea, and started with Wagner's Prelude to Act III of Lohengrin.  The encore pieces included pieces from Bizet, Bernstein, and the popular Korean folk song Arirang. ALL-ARTS also had the video in its archives, so some of the photos are screen shots from my PC. 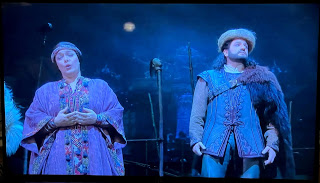 Original  Broadcast Date: ??? Conductor - Yannic Nezet-Seguin.  Turandot - Christine Goerke, Calaf - Yusif Eyvazov, Liu - Eleonora Buratto, Timur - James Morris, Ping - Alexey Lavrov, Pang - Tony Stevenson, Pong - Eduardo Valdes. I am writing this down on July 2, so don't remember the specifics.  I suppose one could go back and at least find out when the live performance occurred ... Below are some screen shots from the TV: 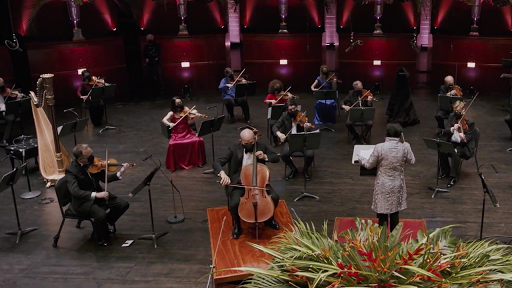 ProgramAndante Cantabile for Cello and Orchestra by Tchaikovsky.Manha de Carnaval by Luiz Donfa.Der Erlkonig by Schubert arr. Liszt.Purple Bamboo Tune, Traditional.Fisherman’s Song at Eventide, Traditional.Happy Days by Chu Wang-Ha.Libertango by Piazzolla.Spring Dawn by Gu Jianfen; Lyrics by Meng Haoran.Singing and Smiling by Gu Jianfen; Lyrics by Wang Jian.Flying Free by Don Besig.Farewell, Traditional arr. Nicholas Hersh.Gong Xi Gong Xi, Traditional.  This was the premiere broadcast of the “event,” which consists of new recordings made at NJPAC on January 22, and archive footage from 2019 and 2020. Took quite a few screenshots during the broadcast.  There were over 600 people watching, which is a good turnout. Several NJSO Chinese members introduced pieces in the program, and there were guest appears by Gabriel van Aalst, NJSO CEO; Huang Ping, Chinese Consul General; Lang Lang; and others. The program was pre-recorded, but still very enjoyable.  Usually I am out-of-town […] 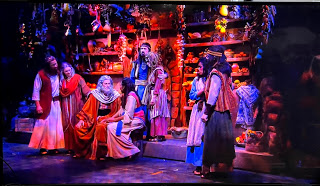 Viewed via the TBN iOS APP.  Free. The familiar biblical account of Noah, embellished by characters and events not inconsistent with the story told in the Bible.  For instance, names were given to folks such as Noah's family members. Some shots I took from the TV.

Concert recorded December 17, 2020.  Part of the 10-concert subscription series. Program Schubert, Quartettsatz, D. 703 (1820). Mendelssohn, Quartet No. 2 in A Minor, Op. 13 (1827). Ravel, String Quartet. The concert originally had Emanuel Ax appearing as well, a few weeks ago 92Y sent out an email announcing that Ax won't be on the program.  I was quite disappointed as I had always enjoyed Ax's musicianship. Despite that, this program was thoroughly enjoyable.  From what I could tell, both the Mendelssohn and the Ravel pieces were not easy to pull off; they were performed brilliantly. I was wondering why the first movement of Schubert was played (the "satz" in the title should have been a giveaway).  Turns out this was a quartet Schubert never completed. It always amazes me how easy Schubert made key changes effortless, he seemed to be […]

Concert recorded Sunday December 13, 2020.  Part of the 10-concert subscription series. Program MOZART: Sonata No. 14 in C Minor, K. 457BLIND TOM WIGGINS: The Battle of ManassasJOPLIN: Heliotrope Bouquet (arr. Chauvin)TANIA LEÓN: RituálFREDERIC RZEWSKI: Winnsboro Cotton Mill BluesBEETHOVEN: Sonata No. 32 in C Minor, Op. 111 Ellie and family were baking Christmas cookies at house on December 13, so I didn't get to see this live.  From the closing credits it appears the concert was not recorded on the 92Y stage, but somewhere in San Francisco instead. Regardless of when or where it was recorded, this is a concert one will enjoy no matter when one sees it. Below are some of the notes I took during my viewing of the event. After Mozart, Denk talked about bookending the recital with the tragic sonatas by Mozart and Beethoven, which to him is a reflection of the year. The Battle of […]

Live Broadcast on December 4, 2020.  Part of the 10-concert subscription series. Program Bottesini, Elegy No. 1. Bach, Cello Suite No. 2 in D Minor, BWV 1008. Xavier Foley, Irish Fantasy. Foley, Always on the Move. Gliere, Intermezzo & Tarantella, Op. 9 I couldn't get to this program until about a week later.  Besides being a bit busy with other (mostly trivial) things I needed to take care of, I also didn't think I would get too excited about the double bass as a solo instrument.  My experience with bass as more than a "double bass" was limited to its chamber role in Schubert's "Trout Quintet" and every now and then listening to Max's playing on the instrument (in person or on TV). In that regard I was glad I caught this program.  The most prominent takeaway for me was the instrument sounded good for most of […]

Live Broadcast on November 19, 2020.  Part of the 10-concert subscription series. Program Schumann, Movements 2 & 3 from String Quartet in A Major, Op. 41, No. 3 (1842). Brahms, Piano Quintet in F Minor, Op. 34 (1864). Even during these COVID times when I seldom go anywhere, I still had trouble catching too many of these 92Y concerts live.  Go figure.  In any case, I caught up with this later in the evening, thus both "viewed" and "live" dates are November 19. Another enjoyable concert.  Only remark I had was about Bronfman's appearance: he appeared thinner, not as impeccably groomed as he used to be for the live concerts I attended (most notable was his somewhat unkempt hair, which was a lot whiter than I expected), and didn't push himself up as much.  Overall, he looked a lot healthier. The quartet only played two of […]