MMmusing is a English-speaking blog specialized in the field of classical music and opera. As such, MMmusing is a qualified source of soclassiq, like Ludwig van Toronto or The Listeners' Club and many others. The oldest article indexed by soclassiq is dated 2012-02-28. Since then, a total of 243 articles have been written and published by MMmusing.

With 1 articles published in the last 90 days, MMmusing is currently a not very active news source. "Not very active" does not mean that MMmusing is less interesting than another more prolific source. Each blog follows a specific editorial line, publishing according to its own rhythm.

MMmusing in the last 36 months

MMmusing has been selected by soclassiq to be among its qualified sources because we believe that its articles fully contribute to the knowledge of classical music and opera. Because it is up to everyone to make their own opinion, to love MMmusing or to prefer other writings, all our visitors and members are invited to discover MMmusing. If you like it, feel free to add it to your browser bookmarks or soclassiq bookmarks (for its members, with the button below). This will allow you to come back to it easily and regularly.

Alex Ross - The rest is noise

The latest articles from MMmusing 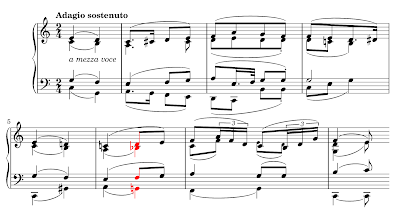 I've made sport for years of complaining that the much-revered Papa Haydn rarely seems to move me in the way his reputation would suggest. But I'd rather not argue that point right now, especially since I've recently become obsessed by a truly great bit of music that's been in Haydn...er, um, in hidin'...or, well, yes, in Haydn's vast catalogue of sonata forms, slow movements, minuets (so many minuets!), prestos, etc. As it happens, I first heard (or noticed, anyway) this Haydn in a live concert, which is particularly meaningful after more than a year of virtually no live performance experiences. Our three string-player children have been attending the magical Greenwood Summer Music Camp for a decade now and, after a sad summer of silence in 2020, the campers are back playing weekly chamber music marathons this summer. There are plenty of repertoire favorites that feature regularly in these 3-4 hour […]

In the past year, for quarantine-based reasons, it's become customary for many musicians and organizations to post virtual concert/recital videos. Obviously, there's very good reason to do this, although this now puts such performances in competition with the virtually infinite supply of concert video from the past. There is of course some perceptive immediacy provided by the notion that a performance was prepared recently, under certain recital-like conditions and for a specific audience, but the big missing piece is that performers and audience are not in the same space - so even a true livestream loses the virtues of a live acoustic, the knowledge that nothing is edited, the tangible sense of being with others, the thrill of a night out, the focus provided by sharing an experience with others, the noisy program-shuffling, the coughing, the search for parking.... well, I guess all that's lost isn't a loss. Anyway, for […]

First things first, today marks the 14th anniversary of the MMmusing blog! 14 is not a particularly interesting number, even though it's significantly larger than the flashier 5 and 10. 14 years is more years than I've spent in any single job, and longer than I've lived in any town, other than my hometown, and though there have been plenty of quiet months here, I'm proud of the unique body of work it represents - and the lively beginning to 2021. A few numbers. This is post #633, although I should admit that more than half of that number came in 2007-2009. Those were different days when a blog might hope to function more as a place people would check regularly, as opposed to now when the best bet is to send readers to new posts via Facebook or Twitter. I don't have a strong public presence on either, so […]

Early in my school vacation week, I was spinning the MM Multimedia Musing Machine wheel  (which you should do regularly as well) and ended up re-reading the post where I first started on my journey towards playing the Moonlight Sonata and Clair de lune at the same time (with a partner). I wrote the following back in 2013: A twitter acquaintance made note that an internet radio station was mistakenly cutting back and forth between two different recordings; another Twitter acquaintance helpfully (?) suggested this was just my sort of thing (see last post), and I was suddenly imagining what pieces might make nice jump-cut partners. I had the idea of splicing quickly and methodically back and forth between two distinct pieces to see if the ear could somehow hear each half as complete, but didn't get so far with that idea - yet. There are many "roads not taken" in my musing past, but this splicing idea caught […] 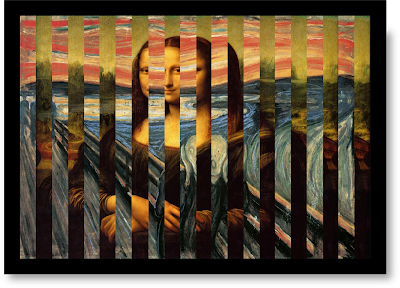 Last week, I wrote about my solo piano recording of an a cappella choral work - an a cappella work about a blue bird. That call-back to my "Songs Without Singers" series from the early years of MMmusing gave me the idea of re-visiting and updating these recordings for our new multimedia world. Once again a bird is the subject of today's song, though once again, all the singing will come from the hammered strings of a piano. And like Stanford's The Blue Bird, this song also makes notable use of the minor seventh chord. Back in 2008, when I recorded six songs without anyone singing along, YouTube was in its infancy, and so I just posted mp3 audio recordings in the clunky way Blogger allowed. As my YouTube channel has grown, I find satisfaction in archiving such recordings on video with my favorite kind of visual to accompany: THE […]

Although January has generally been the quietest month here at MMmusing, this post, which has arisen naturally from recent experiences, encapsulates the kinds of things that interest me the post. You'll find here two significant new multimedia creations, many nods to past work, and reflections on how seemingly disparate topics can run together. Because these sorts of connecting threads are the primary point, these words might run a bit longer than usual, but I hope you'll make it to the end of path, even if you find yourself sidetracked as I so often am. So, this story begins with a simple school lunch period last Wednesday. Twice a week, I oversee a group of nine 8th graders taking a noon-time break from their studies, and one student had been asking for some time if I would bring a keyboard in for him to play something for us. We crossed signals […]

As much as I love talking about unexpected connections, it's embarrassing that I missed a big one between my first and last posts of January. When discussing the magical, ever-changing and unsynchronized ostinato patterns suggested by composer William Albright for the lovely hymn tune named for him, I compared the process to Terry Riley's In C. Riley's iconic masterpiece is perhaps the best-known work in which musical fragments are combined in different ways depending on choices the performers make. But for In C to be truly successful, those decisions should be made with an improvisational feel for what's going on around; the possible interactions of neighboring patterns, while varied, should not be left entirely to chance. Riley planned the progression to allow for all sorts of wonderful interactions among neighboring segments - what he described as the emergence of "fantastic shapes." Its design is very flexible, but far from random.   What […]

If I were more organized, I could now mark quite a few milestones of each year with MM multimedia. For example, I have ready-made music for the birthdays of: Bruch, January 6 Ravel, Marcy 7 Sondheim, March 22 Bach, March 31 Prokofiev, April 27 Hindemith, November 16 Messiaen, December 10 Other important days include my Blogaversary (Feb. 24), July 4,  and of course, Augmented Sixth Day! Not to mention countless Christmas options.  Today I was reminded of a video I made (for vague reasons) last April which happens to be perfectly suited for today. If you somehow haven't seen Groundhog Day, I suppose this contains mild spoilers, but at any rate, it's my attempt to make this almost perfect movie just a little more perfect: P.S. Not going to go into my not completely serious "Haydn […]

In choosing music for this morning's services - livestreamed affairs in which only one choir soloist and a clergy member or two do all the singing - I had kind of half-heartedly chosen one of our hymnal's "deep cuts" as a solo to be sung by the soprano on hand. The Hymnal 1982 has now been the official hymnal of the Episcopal church for almost forty years, but it has some unexpected little corners which still communicate an optimistic openness to new things, even if some of the new things might seem a little dated now. I always feel a slightly and wonderfully subversive energy when I happen on these pages, and would love to go back and look in on the room where these choices were made. There are some really lovely tunes by David Hurd and Calvin Hampton that I've loved for years now, but I've always looked a […]

In my last post, I showcased a video in which Freddie Mercury's We are the champions melody is repurposed in the mold of Stravinsky's The Rite of Spring bassoon solo.  But it occurred to me that rather than hearing unaccompanied Freddie, maybe what we needed was accompanied Igor. Le voilà! Although I suggested before that harmony wasn't the main thing keeping me from hearing Stravinsky as Queen, I'll say again that, even though I'm perfectly aware of all the matching pitches, this just doesn't sound like The Rite of Spring in this context. Beginning over a big major chord obscures all that primordial mystery we should hear around the solo bassoon, so perhaps harmony is more important that I'd thought. In this context, it becomes remarkably tamed and even a little glam.  Nonetheless, Igor and Freddie make a fun pair and should probably star […]