Maestro Glorioso: Ten Essays in Celebration of Sir John Barbirolli, by John Holden (Kennington, the Barbirolli Society, 2021). Price £20.  It’s amazing how the magic of John Barbirolli’s conducting still entrances, 50 years after his death. Partly that’s because of the recordings he made in the later years of his life, captured as they were with the technical quality to be completely rewarding in today’s digital age. But for those of us who saw him in person, in action, there’s more than that, something completely mesmeric about his personality and platform manner that never leaves the memory. Who can forget his entrances, hand on breast in ‘Little Corporal’ style (and he would never even walk on to a platform unless there was complete silence in the auditorium), his royal-style waves, his conducting of the National Anthem facing the hall as if daring all present to join in – and […]

Review of The Barber of Seville at Clonter Opera

Elsa Roux Chamoux as Rosina in  Clonter Opera's production of The Barber  of Seville. Credit Edward Robinson The “Glyndebourne of the North” really came up trumps on Thursday evening, with the smell of haymaking in the air (Clonter Opera’s base is surrounded by farmland) and glorious sunshine to revel in. I don’t remember choosing to have a picnic outside there before (there’s always space inside for dining, too), but it was the natural choice as well as the advisable one in these Covid times. Inside, the seating was well spaced on alternate rows, the only slight worry being that here, as in some other classical venues I’ve noticed, the clientele includes some geriatrics who don’t seem to realise that wearing a face covering means you actually cover your face, not just dangle it from your chin. The production of Il Barbiere di Siviglia(in Italian, with English sur-title translation) was lively […] 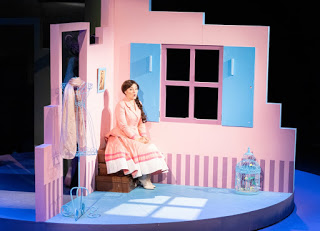 Review of the Hallé's filmed concert at the Bridgewater Hall, released 29th July 2021

Sir Mark Elder conducts the Hallé in The Firebird suite  c.The Hallé The Hallé ‘Summer Season’ of live music in Manchester has included streamed film versions of three of the concerts, and the final one, which I had to miss seeing in person, is now available. Sir Mark Elder conducts and the programme is all Russian music: Rimsky-Korsakov, Rachmaninov and Stravinsky. A ‘Russian night’ was often a popular formula in the orchestra’s summer Proms a decade or so ago, but this was no set of Tchaikovsky and others’ greatest hits: though Stravinsky’s The Firebirdsuite would be a draw any time, the other two pieces are comparative rarities and it was a great idea to include them. As through the entirely filmed ‘Winter Season’, the production standards of this document of the orchestra’s playing are extremely high. The virtuosity of the camera operation and mixing and the splendour of the […] 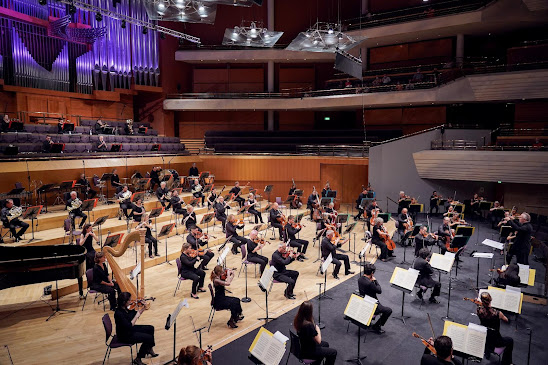 Samuel Boden as Acis and Anna Dennis as Galatea  in the Early Opera Company's Acis & Galatea at  Buxton International Festival. Credit Genevieve GirlingHandel’s “serenata” for five singers and small orchestra is a lovely piece of concisely varied musical invention, the product of the necessities of a particular time and place but richly crafted and beautiful to listen to. It can be done with very little production resources beyond imaginative vocalists (there was a great little version from the St Asaph Festival years ago which popped up at Manchester Cathedral and featured live doves for the “pretty warbling choir” and a bovver-booted Christopher Purves as Polyphemus in one of his first professional roles after being part of Harvey and the Wallbangers). It's based on a snippet of Ovid, as versified by John Gay of Beggars’ Opera fame (and probably other authors): a pastoral myth about a nymph and a […] 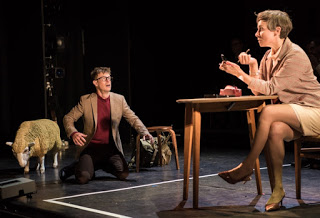 Nikki Martin as Cendrillon at Buxton International  Festival. Credit Genevieve Girling Pauline Viardot’s reputation in her day was as a performer: one of the great mezzos of the 19th century, she was the sister of Maria Malibran, whose untimely death after a Manchester Musical Festival vocal sing-off in 1836 is sometimes, rather ill-adroitly, clung to as a distinction in the city’s cultural history. She also lived in a cheerful ménage-à-trois with her husband and the novelist Turgenev. Atta-girl! She spent much of her time in the company of the aristocratic and cultured elite, as did most serious artists, and of course she taught private pupils (ditto, ditto). Her compositional gifts, though considerable as befitted someone good enough to take lessons from Liszt, seem to have been practised mainly in creating entertainment for her own salon and giving her pupils performance opportunities along the way. Hence her piano-accompanied comic opera (a […] 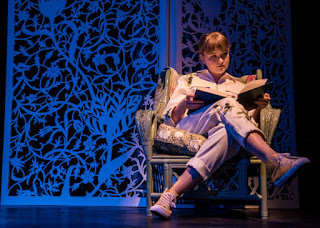 Sir Mark Elder and the Hallé  The Hallé was back playing for a live audience in the Bridgewater Hall – and what a sense of achievement that simple fact gave. Sir Mark Elder told the evening audience (the second of the day) how much the orchestra had missed them. We’d missed seeing the band in person, too, but it surely raised their spirits to see most available seats filled and a standing ovation at the end, instead of just microphones and film cameras. A Thursday night reception for the Hallé’s music is, after all, something in Manchester’s lifeblood and has been since 1861. If these were ‘normal’ times, we’d be seeing the Hallé Proms, and this concert and the ones to follow in the ‘Summer Season’ look in some ways like Proms programmes – but there’s been more to their planning than just providing a set of accessible, optimistically-charged orchestral […] 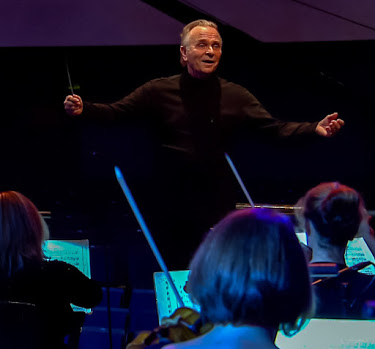 Isabelle Peters as Anna in Dido's Ghost  at Buxton International Festival, Buxton  Opera House. Credit Genevieve GirlingPurcell’s Dido And Aeneas (book and lyrics by Nahum Tate, otherwise mainly known for penning “While Shepherds watched”) has long been recognized as a masterpiece on the cusp of the change from masques to real opera in English. But it’s quite short, part of the original music is lost, and no one quite knows how it was presented in its day, apart from a version at an all-girls boarding school. It does contain one utterly moving song: Dido’s Lament, as it’s often known, beginning “When I am laid in earth …” How can we bring it on in a version for today, except by quite a lot of imaginative reconstruction and restoration, possibly inserting bits of other music by Purcell or even his contemporaries – as Jonathan Miller did in the production seen […] 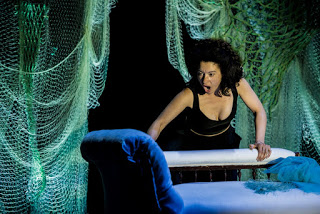 David Webb, Eleanor Dennis and Graeme Broadbent  in The Dancing Master at Buxton International Festival.  Credit Genevieve Girling There was no doubt that Buxton Festival’s audience was glad to see it back in the glorious Peak District opera house, going by the applause for Malcolm Arnold’s The Dancing Master on Friday night. Even a half-full house sounded like a capacity crowd at the conclusion of its interval-less performance. Live opera! Yes, and necessity has become the mother of invention for the festival this year. How to find shows that can be performed by smallish casts on a smallish stage with smallish orchestra pit, keeping the performers and musicians suitably distanced from each other – and the audience, too? Buxton had several alternative plans for its festival until quite late in the preparation process this year: it had to, like everybody else in the arts recently. The final one has […] 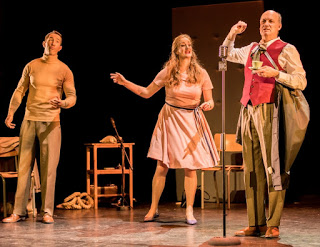 Review of Opera North's performance of Fidelio at The Lowry, 15th June 2021

Rachel Nicholls as Leonore in Opera North’s production of Beethoven’s Fidelio. Credit Richard H Smith  Opera North’s return to live performance at The Lowry received the same kind of reception that the Hallé’s to the Bridgewater Hall did almost a fortnight ago. My goodness, we’re glad to see and hear live music in our community again. It was a one-nighter only, an in-concert presentation with a small and socially distanced, mask-wearing audience, of course, no set beyond a nicely lit backdrop colonnade of pillars effect, with fiery light glowing between them, and no interval. The cast were in a line at the front of the stage, with the orchestra behind, and had to cope with minimal acting, even when singing about being in each other’s arms when obviously they couldn’t be. (The only other thing in the visit is a so-called ‘Night at the Opera’ of concertised excerpts, so […] 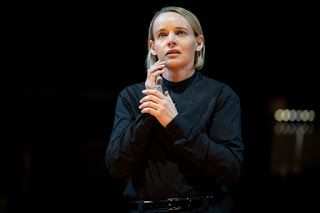 Review of the Hallé's filmed production of The Soldier's Tale 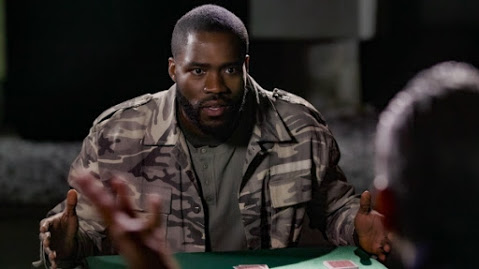 Martins Imhangbe in The Soldier's Tale: credit The Hallé The final ‘episode’ of the Hallé’s digital Winter Season 2020-2021 is a triumphant vindication of the policy of turning music performance into world class film production that has animated it from the start. After all, once you’re afloat in the great wide ocean of the internet, you’re up against the world: the potential audience is incalculable, but the competition for attention is enormous. Re-thinking the idea of a ‘concert’ into an hour or so of audio-visual content for a smallish screen, and then selling it to people who want to choose when they engage is a task in itself. It’s not just a case (except for those with a dedicated following of a enthusiasts) of going into an empty venue, setting up a few cameras and microphones and doing what you’d do if there were an audience. But it does give […]