Planet Hugill is a English-speaking blog specialized in the field of classical music and opera. As such, Planet Hugill is a qualified source of soclassiq, like Meeting in Music or Lucid Culture and many others. The oldest article indexed by soclassiq is dated 2018-01-13. Since then, a total of 2705 articles have been written and published by Planet Hugill.

With 182 articles published in the last 90 days, Planet Hugill is currently a very active news source. "Very active" does not mean that Planet Hugill is more interesting than another less prolific source. Each blog follows a specific editorial line, publishing according to its own rhythm.

The last article in Planet Hugill, "Prioritising the musicians: new boutique, artist-led record label and streaming platform, October House Records launches next month", is dated 2021-09-20. By 2020, this source had published 744 articles (574 since the beginning of 2021). Over the past 12 months, Planet Hugill has published an average of 65 articles per month.

Planet Hugill in the last 36 months

Planet Hugill has been selected by soclassiq to be among its qualified sources because we believe that its articles fully contribute to the knowledge of classical music and opera. Because it is up to everyone to make their own opinion, to love Planet Hugill or to prefer other writings, all our visitors and members are invited to discover Planet Hugill. If you like it, feel free to add it to your browser bookmarks or soclassiq bookmarks (for its members, with the button below). This will allow you to come back to it easily and regularly.

The latest articles from Planet Hugill

October House Records (OHR), which launches on 1 October 2021, is a new venture by composer and cellist Colin Alexander which will run as both a record label and a paid-for subscription streaming/download platform. It is a boutique online record store run by musicians, whose releases will not be available on any other platform or website OHR's funding model is intended to prioritise the artists and 85% of royalties will go to artists. Releases will happen four times per year, with coordinated batches of new releases by multiple artists with each of them contributing to each other’s PR efforts by working together with the name 'October House Records'. OHR will offer listeners the option to stream all releases for a monthly subscription fee whilst also being able to download EP’s and albums for a fee. Downloads will also be available to non-subscribing guests too, as will gift purchases, and a radio […] 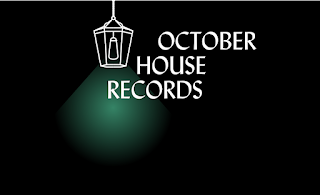 In support of Afghan musicians

Recent image from an Afghan music department Ulla Benz is a German violinist who teaches at the Berlin University of the Arts, and is also a medical Doctor in Munich working on a voluntary basis for Cultures in Harmony via founder William Harvey who is concertmaster of the National Symphony Orchestra in Mexico and Emeritus Professor of the Afghanistan National Institute of Music.The situation in Afghanistan for musicians and artists is tragic, and extremely dangerous. In the past weeks the Taliban have been destroying instruments, and now musicians are also being persecuted, their homes burned and people killed. A WhatsApp group of over one hundred and sixty Afghan musicians is full of cries for help which Ulla and William see on a daily basis. Some of these musicians have also been victims of previous ISIS bombings. Ulla is personally connected to one young musician - seventeen years old - […]

Berkeley Ensemble (Photo Louise Mather) The Conway Hall's long-running Sunday Concerts series starts its 2021/22 season on 26 September 2021, a welcome return to weekly, in-person concerts at the venue, though all the concerts will be available to watch live-streamed as well. The season opener is a pair of concerts from the Berkeley Ensemble with three rare 20th century British works, by Imogen Holst, Lennox Berkeley and John Ireland, followed by Beethoven's youthful Septet, a work whose popularity the composer resented as he felt it overshadowed his later works. The season at Conway Hall continues with the Greenwich Trio, and a chance to hear the Norwegian Engegård Quartet [see my interview with them].  17 October sees the final of the Conway Hall's re-launched Clements Prize for Composers when the Piatti Quartet will perform works by seven young composers, Jacob Fitzgerald, Alex Groves, Vivek Haria, Noah Max, Emily Pedersen, Alexander Verster, and Dominic […]

Jerod Impichchaachaaha' Tate: Lowak Shoppala' - premiere in 2009  The composer Jerod Impichchaachaaha' Tate is both a citizen of the USA and the Chickasaw Nation in Oklahoma and his music reflects this dual heritage, combining the Western classical tradition with that of Native American cultures. His work, Lowak Shoppala' (Fire and Light), expresses Chickasaw identity through classical music theatre. Lowak Shoppala' premiered in 2009 and the premiere recording was released in June 2021 on Azica Records, featuring Jerod conducting Chickasaw Nation Children's Chorus and Nashville String Machine with baritone Stephen Clark, sopranos Chelsea Owen and Meghan Vera Starling and narrators Richard Ray Whitman, Lynn Moroney, and Wes StudiI recently chatted to Jerod by Zoom to find out more about the work. The Chickasaw Nation is a federally recognized Native American nation, with headquarters at Ada, Oklahoma. They are indigenous people of the Southeastern Woodlands and the […] 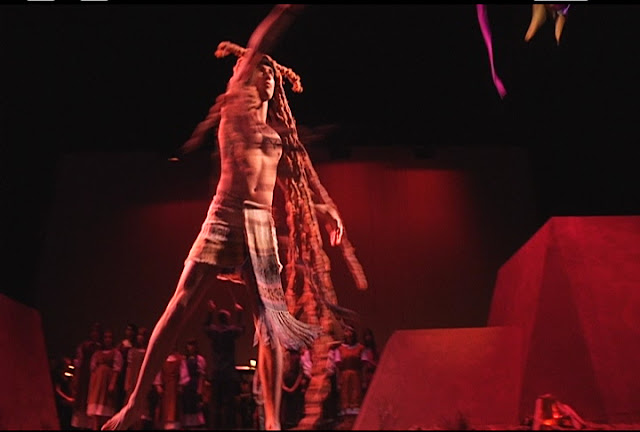 Not just a fine debut recital: Julian Van Mellaerts & James Baillieu are joined by family & friends for their exploration of Songs of Travel and Home on Champs Hill Records 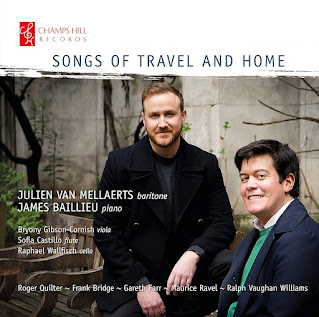 Mixed blessing: Bach's St Matthew Passion at the BBC Proms with never quite solves the problem of how to fill the Royal Albert Hall with this profoundly contemplative work

Bach: St Matthew Passion - Arcangelo in rehearsal at the Royal Albert Hall - BBC Proms Bach St Matthew Passion; Stuart Jackson, Matthew Rose, Louise Alder, Iestyn Davies, Hugo Hymas, Roderick Williams, Arcangelo, choristers of St Paul's Cathedral, Jonathan Cohen; BBC Proms at the Royal Albert Hall Reviewed by Robert Hugill on 9 September 2021 Jonathan Cohen brings together a fine array of soloists and instrumentalists for a very traditional style performance with moments of great musical beauty The first performance of Bach's St Matthew Passion at the Proms wasn't until 1968 (with Karl Richter as conductor) though Sir Henry Wood had conducted highlights from the work earlier in the century. And Wood was no stranger to the complete St Matthew Passion as he conducted it at the Sheffield Festival in 1908 with a chorus of 300 and an orchestra including 'eight […] 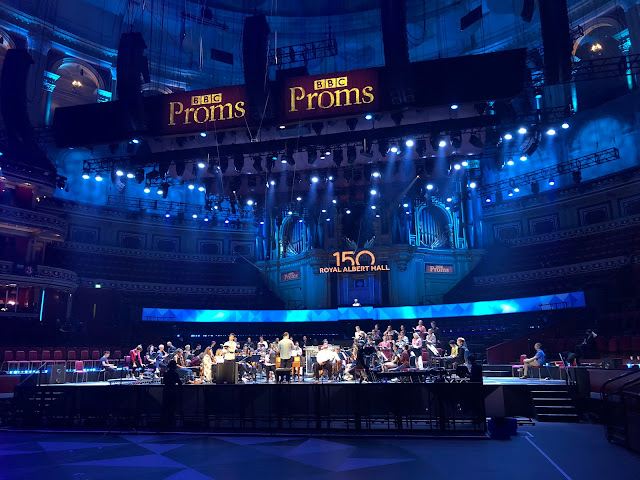 'After the end of the dark Nazi era, everyone was so hungry to take in the new' - WDR celebrates 70 years of its Musik der Zeit concert series in Cologne 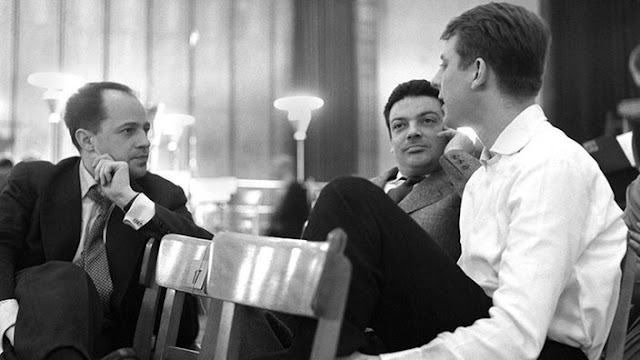 Pierre Boulez, Bruno Maderna, and Karlheinz Stockhausen at Musik der Zeit in Cologne in 1958 In October 1951, Igor Stravinsky travelled to Cologne to conduct a concert of his own music, this would be the first concert in the Musik der Zeit concert series which celebrates its 70th anniversary in Cologne this year. The Cologne of 1951 was still a city in ruins, the Hohenzollern Bridge lay destroyed in the Rhine but musical life was developing thanks to the founding of the Northwest German Broadcasting Corporation, out of which came the present WDR which still runs the Musik der Zeit concert series.  On 2 October 2021, in the WDR Funkhaus, Cologne, Enno Poppe conducts the WDR Symphony Orchestra in a concert celebrating the 70 years of Musik der Zeit with music by Xenakis and Boulez, plus premieres of works by Klaus Ospald and Justė Janulytė. The evening continues with short, celebratory concerts at […]

Tête à Tête: The Opera Festival might have finished its live performances for this year's festival, but the jollity is not over as on Friday 17 September 2021 the festival is broadcasting films of three of the highlights from this year's festival.  Things begin with The Venus Bushfires, a watch party with the creative collective which has multidisciplinary artist Helen Epega at its centre. Then comes Alastair White's latest fashion-opera, RUNE. This is the third in a sequence of works which White has been producing [see my interview with him], and RUNE features performances from Patricia Auchterlonie and Simone Ibbett-Brown, an ensemble of three grand pianos, contemporary dance with interactive sculpture, and high fashion by Ka Wa Key. Finally, the evening concludes with The Castle of Crossed Destinies with words by Giovanni Privitera and music by Matteo Fania, an adaption of Calvino's novel that shows us knights in Times Square, legendary alchemists, and […]

Faced with the lack of representation of their own experiences in the traditional song repertoire, soprano Samantha Crawford and pianist Lana Bode set about creating their own programme

Lana Bode and Samantha Crawford performing dream.risk.sing (Photo Frances Marshall) Faced with the challenge of finding song repertoire which reflected the diversity of their experiences and frustrated by the lack of representation in traditional song repertoire, British soprano Samantha Crawford and American pianist Lana Bode have set about doing it for themselves. The two have created a programme that tells women's stories from a woman's perspective. The result, dream.risk.sing was developed during 2020 and Crawford and Bode will be presenting a pared down version of the recital at the Oxford Lieder Festival on 22 October 2021 at a late-evening concert which will also be live-streamed and available on the festival's website until 30 November 2021.The centrepiece of the recital is the premiere of a song cycle by composer Charlotte Bray and poet Nicki Jackowska. Crossing Faultlines explores the topic of women in the workplace, perhaps the first song-cycle so to do. Also […] 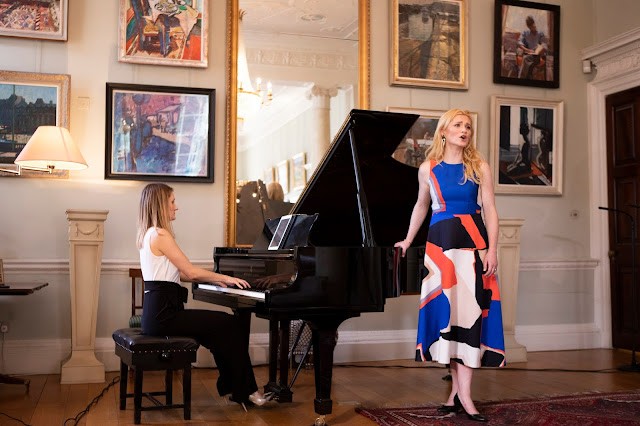 Sheer diversity: The Boulanger Legacy - music for violin and piano from the Boulanger sisters and three of Nadia's pupils, one Polish, one American, one Argentinian

The Boulanger Legacy - Lili Boulanger, Grazyna Bacewicz, Astor Piazzolla, Leonard Bernstein, Nadia Boulanger; Merel Vercammen, Dina Ivanova; TRPTK Reviewed by Robert Hugill on 10 September 2021 Star rating: 4.0 (★★★★) An imaginative selection of music for violin and piano from sisters Nadia and Lili Boulanger alongside that of Nadia's pupilsNadia Boulanger's pupils were so many and varied, from Aaron Copland to Jean Françaix, from Philip Glass to Daniel Barenboim, from Elliott Carter to Quincy Jones, from Bert Barcharach to John Eliot Gardiner, that each recital looking at their music will inevitably take a different route. 16 September is Nadia Boulanger's birthday, so it seems a good point to consider her legacy.A disc released earlier this year, The Boulanger Legacy on the TRPTK label by Dutch violinist Merel Vercammen and Russian pianist Dina Ivanova places the music of Nadia Boulanger and her sister Lili Boulanger alongside that of three of Nadia […] 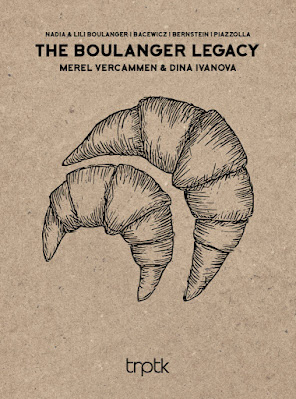